June 16, 2020
EONIA is a derivative of ESTR and EONIA will not be published anymore as of January 2022. The new definition of EONIA, since October 2019, is ESTR + 8.5bps. EONIA does not add any financial advantage, but add legal risks.

The fixed spread is often described as trivial. To my point of view it is not so trivial in practice as a 8.5 bps spread on the overnight rate is not the same as a 8.5 bps spread on the swap rates. There is a tradition of OIS with spreads, but the spread is on the final (compounded) rate, not on each fixing. The situation is different for LIBOR swaps, where there are composition with spreads (the famous straight, flat, spread exclusive and none, compounding methods). Similar issues are probably true with collateral. From a system perspective, ESTR + 8.5 bps is not the same as EONIA. 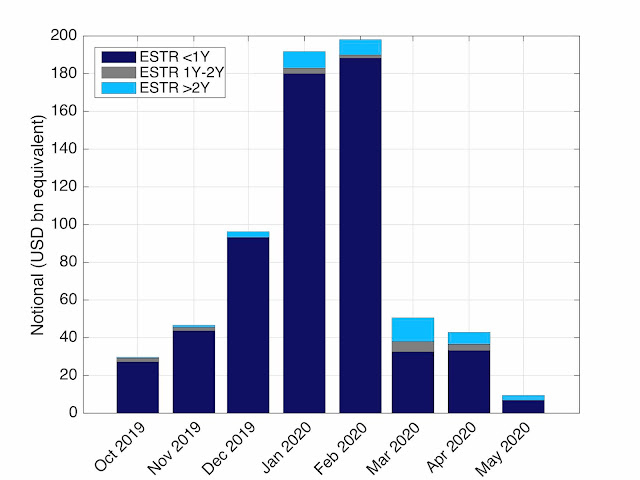 Hence my question, where is ESTR? Why are banks still trading EONIA? Is it system issues? Is it laziness? We are one month away from the CCP imposed collateral change big bang. What will happen after that big bang? Will the OIS market collapse? Will the market still trade predominantly EONIA?
Note added: I have not found the same detailed statistics for EUREX. If they are available, don't hesitate to add the link in the comments. I would be happy to comment on them.
Benchmark CCP Transition

For more than a year I have been saying that " compounding fixing in arrears " is not an acceptable fallback mechanism for IBOR rates. In the answers to the ISDA consultation, it appears that I was the only respondent to indicate that he was totally opposed to this methodology. My answer to the consultation can be found on my advisory site. I have published a blog about my question on the mechanism when the consultation was announced in July 2018 and detailed the problems in my quant perspective on IBOR fallback consultation results . Since then I have blogged about it and spoke about it at different seminars and conferences. To date, no public (or private that I'm aware of) comment indicating that there is actually a plan or a workaround to solve the important issues I'm demonstrating have been provided. Following my presentation at the Quant Summit last Wednesday , Risk.net has published yesterday an article on the subject. From the article, I gather that the
Read more 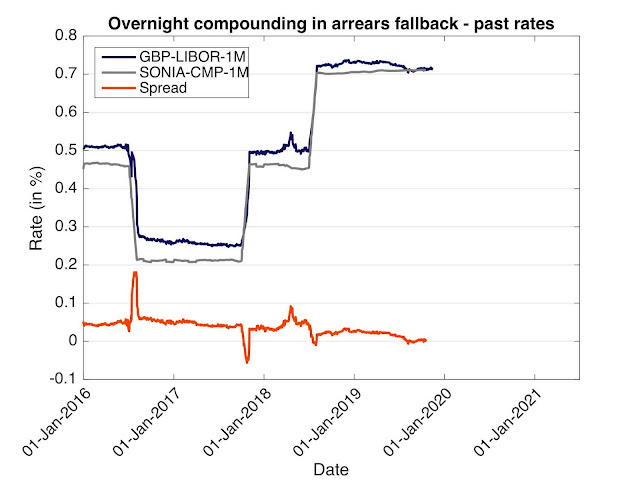 At the end of November 2018, I took a GBP (paper) position on my view that LIBOR fallback approach will allow better informed participants to make money (transfer value from) the end-users. I have reported on a regular basis about that position in the first six months (see list of episode at the post bottom). One year later, what happen to that view and to my position? I'm happy to report that Saint Nicolas brought me a very nice present ( Saint Nicolas is an important day in Belgium for good kids like me ;)). On 29 November 2018, I wrote The horizon for my position is 29-Nov-2019. Target profit is 5bps x ~2000 GBP/bps = ~10,000 GBP. I cut the position on the earliest of when the market has reached 8.5 bps or on 29-Nov-2019. I'm also expecting a little bit of carry as the current level of realised spread (1 to 3 bps) is below the market basis spread. Where do I stand today? According to my figures, in term of spread convergence, the spread has decrease by 4.5 basis poi
Read more

December 29, 2019
IBOR transitions (mainly LIBOR transition for the moment) is a huge undertaking for the derivative markets. It implicates many market participants, from large dealer/broker to small end users. Everybody want the transition to be perceived as " fair ". Reading trough the regulator published notes, FAQ and letters, I notice that I don't have the same definition of " fair " than some regulators. This leads to my question in the title: How low is the regulators' bar? To illustrate my point, I will take two examples, one from the FCA and one from the CFTC . The italic texts below are extracts from the regulators and ISDA documents, the regular text are my comments. FCA The FCA published a " Questions and answers for firms about conduct risk during LIBOR transition ". Treating customers fairly when replacing LIBOR LIBOR discontinuation should not be used to move customers with continuing contracts to replacement rates that are
Read more