Wow! (I repeat myself)

Funny that is what I have suggested for some time. Not later than yesterday I was telling to a client: don't sign the protocol, don't go through the fallback, this is a unmanageable Frankenstein (see my post about Fallback transformers: gaps and overlaps).

My advise, in the same presentation was

Fallback does not create OIS-like exposures. Better to repaper existing LIBOR swaps to OIS (even if with same spread).

Remember that the main argument for pre-cessation trigger in ISDA consultation was that "this is the only way to have bilateral trades in line with cleared trades". There was a general believe that CCP would adopt the ISDA protocol. But in the same client discussion yesterday I said: "CCPs do whatever is the easiest for them, not what is right for the market. We still have to read the details of the CCP fallback"!


CCPs have full discretion on how to incorporate fallback.
muRisQ Advisory presentation to a client on 17 December 2020.

Such a move can only slow down the adoption of the ISDA fallback protocol, and maybe bring it to a halt, which was already a non-starter for me (see Signing the LIBOR fallback protocol: a cautionary tale (again) ). Now if you have already signed the protocol you are really in trouble.

Another quote from an exchange of email with a journalist:

it is simply a fair treatment of the existing contract which is different than an irrelevant fixed spread and complex resulting Frankenstein-like OIS in the fallback.

"The move is designed to avoid a bifurcated market in which liquidity is split between trades referencing the RFRs and those using the fallback rates developed by the ISDA." CCPs want to push the bifurcation problem out of CCPs to end users. The end-users will have to deal with the bifurcation problem on their bilateral trades plus they will have to manage a basis bilateral/cleared. Another way to make sure that the support for CCP is falling.

As I'm at the CCP issues. There is still one regarding EONIA that I'm seeing coming soon. This is based on some recent quotes read in the press (Authorities renew calls for €STR take-up).

However, I don’t believe that’s problematic: our primary concern is to manage risk, and in this instance – thanks to the fixed spread – all the dynamics of forward-€STR can be captured through forward-Eonia, and vice-versa.
Philip Whitehurst, head of service development for LCH’s rates business

[..] LCH [..] have previously evoked the possibility of a coordinated “big-bang” switch that would automatically convert all outstanding Eonia contracts to €STR on a given date.

Why do they need a big-bang conversion if they can "manage risk in this instance”? The big-bang would be extremely time consuming for the members, generate huge operational risks, require rebooking of thousands of trades by the participants and is a non-trivial exercise from a valuation perspective that would require some approximations. Why are they proposing it? I have not heard any good argument for it from the CCPs. The only answer that I can find to this puzzle is that actually they cannot really manage the EONIA swaps after the fallback. Their systems (like most systems) cannot cope with fallback instruments. I see it as a way to push the problem out of the CCP to the CCP participants. They will have the problem on their bilateral trades plus they will have to manage a basis.

If the old-style contracts are no longer freely traded, then that may undermine confidence in our default management capabilities, for example our ability to source hedges or auction bids for these types of transactions in a default

Added 2020-12-21: Regulators, the FCA in particular, have indicated that the will apply "enhanced regulatory scrutiny" on LIBOR transition. I guess that it means they will ask "serious questions" to firms that have signed the protocol to know how they will manage their market risk. The old-style contracts with fallback will not be liquid, generate basis risk with liquid new swaps and have unmanageable daily spikes in exposure. For sure a special scrutiny is required for those swaps. If you negotiate and re-paper bilaterally to OIS all those questions disappear. You have one year left to negotiate with your counterparties. The same FCA has repeated that banks need to "treat customers fairly", so those negotiations should be relatively straightforward.

Added 2020-12-21: On top of the above, it seems that LCH will also transform FRAs into Single Period Swaps with some kind of cash compensation. Hopefully they will not forget convexity adjustment this time!

For more than a year I have been saying that " compounding fixing in arrears " is not an acceptable fallback mechanism for IBOR rates. In the answers to the ISDA consultation, it appears that I was the only respondent to indicate that he was totally opposed to this methodology. My answer to the consultation can be found on my advisory site. I have published a blog about my question on the mechanism when the consultation was announced in July 2018 and detailed the problems in my quant perspective on IBOR fallback consultation results . Since then I have blogged about it and spoke about it at different seminars and conferences. To date, no public (or private that I'm aware of) comment indicating that there is actually a plan or a workaround to solve the important issues I'm demonstrating have been provided. Following my presentation at the Quant Summit last Wednesday , Risk.net has published yesterday an article on the subject. From the article, I gather that the
Read more 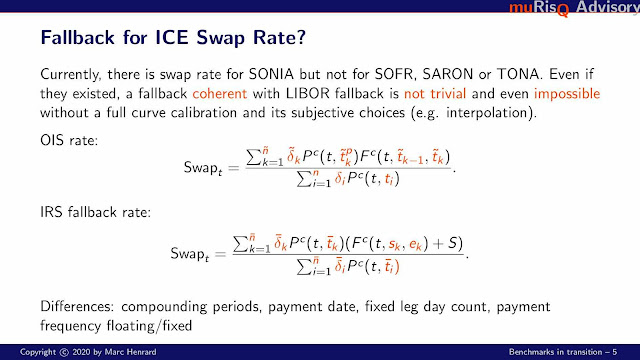